We’ve been pretty upfront about the fact that TV and movie writers, directors, and producers have massacred dads in their work. Dads are portrayed as completely distant and uninvolved in parenting, a danger to our children, or complete buffoons incapable of handling even the simplest parenting moments.

When the team at Lionsgate called to invite 25 members of the NYC Dads Group to attend a free screening of their latest film, What to Expect When You’re Expecting, I was was very weary of getting caught up in the PR machine of what was sure to be a funny, but disastrous portrayal of dads. We communicated our concerns to Lionsgate, and they assured us that we had no reason to worry.

So, with cautious optimism, we did in fact attend a screening last night, and I have to say, it blew past all my expectations, both as a film, and as a reflection of the experience of pregnancy for moms and dads.

I don’t want to give too much away, but the film, like the book of the same name, gives a peak into the variety and the trials and tribulations of conception, pregnancy, childbirth, and adoption. Conception is easy, or even unplanned, for some of the couples and difficult and full of intervention for others. Pregnancy is joyful and beautiful for some, and debilitating, painful, and gross for others. Childbirth is quick and painless for some, long, painful, and surgical for others. All that said, this is a reflection of the experiences for upper-middle class, heterosexual, mostly white people (though Jennifer Lopez, Chris Rock, Rodrigo Santoro, and Amir Talai are featured prominently). Jennifer Lopez’s character does lose her job sometime in the film, and the loss does effect some decisions, but the rest of the characters seem to be without financial worry.

I’m not a film critic, so I’m not going to talk about the cinematic qualities, but as a filmgoer, I found the movie to be laugh-out-loud funny and certainly a more than palatable date-night movie when your partner suggests it. This is definitely a movie for couples that are thinking about having children and those that have fairly recently been through adoption or childbirth. Our youngest son was born nearly four-years ago, and the jokes and references still resonate.

And the portrayal of dads? The film goes back and forth between the conception/adoption, pregnancy, and childbirth experience mentioned above, and scenes of The Dudes Group, a group af dads that get together regularly, with their kids, to blow off steam and get support from another (sound familiar?). The scenes with the couples authentically represent the struggle and potential marginalization of dads. More than once, dads are put in their place when they have an opinion because their partners are the ones sacrificing everything. For example, one couple is seen debating the decision to circumcise (he’s for it, she’s against it), and in the heat of the moment, says that it would be easier to be doing this by herself– a comment I know fathers are hearing. These scenes also show dads going through the transition to fatherhood– some eagerly and immediately, others are worry and fear.

For me, the scenes with the Dudes Group are the highlight of the movie. Sure there are some gratuitous jokes for laughs, but they are the same gratuitous jokes that some dads in our group make during one of our Meetups. The Dudes also have moments of oneupmanship in supposed “bad parenting,” but we see the opposite as they are seen constantly wearing their babies. The group’s code includes “Don’t Talk About What We Walk About” and “We Don’t Judge,” two rules that we definitely encourage in our group. The Dudes Group in the movie is framed as the way to get expectant fathers comfortable with fatherhood, which must be a first as a popular culture reference. I’m guessing The Dudes Group will be featured even more prominently in the sure to be sequel, What to Expect: The First Year.

If anything else is missing from the movie (aside from gay/lesbian couples and working/middle class families), it’s the fact that no attention is given to issues like childcare and work-life conflict, but again, maybe they’ll bring some of those issues in for the sequel.

Overall, a funny and authentic look into this slice of American modern expectant parenthood.

Here are some pictures from our own Dudes Group- all taken by Adam Jeffery, a talented photographer and member of the NYC Dads Group. 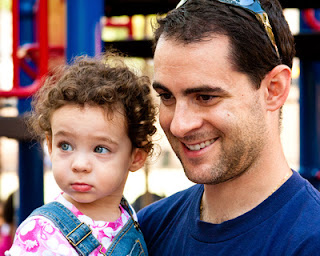