Editor’s Note: Coney Island in Brooklyn, N.Y, kicks off a week-long celebration of “Summer in Our City Dads Group Cities.” Each weekday, we’ll highlight a family fun spot or activity in one or two of the 11 U.S. locations of City Dads Groups.

As a boy growing up in Brooklyn, I always enjoyed trips to Coney Island. While the area has had its share of ups and downs and was recently hit hard by Hurricane Sandy, there is still something special about it.

There’s nothing like walking down a seaside boardwalk and seeing attractions like Deno’s Wonder Wheel (built in 1920) or the Cyclone roller coaster (opened in 1927) that have entertained New Yorkers for generations. That’s why I make it a point to visit Coney Island once a summer. And, now I can take my daughters and show them their Brooklyn heritage.

We began this year’s visit with a quick trip to the New York Aquarium to see penguins and sea lions and some great exhibits on tropical fish and coral reefs. (Insider Tip: If you are a member of the NY Wildlife Conservation Society, you can park your car for free at the Aquarium parking lot). After the aquarium, we made our way to Deno’s Wonder Wheel Amusement Park, where my daughters rode a carousel, and my older daughter rode on rides like Dizzy Dragon, Flying Elephants, and Jumping Motorcycles.

We didn’t make it to the Wonder Wheel itself because we had to stop for lunch at Nathan’s Famous, a must on any visit to Coney Island. I always recommend the cheese fries! For dessert, we discovered a newcomer to the area – Coney’s Cones – a homemade ice cream shop which opened in 2011. You can tell from the picture that my girls were satisfied customers.

There’s so much to do with your kids in Coney Island that I just scratched the surface. Don’t forget that you can actually enjoy the beach right beyond the boardwalk. You can also catch the Brooklyn Cyclones play a minor league baseball game at their stadium. There are also annual festivals like the famed Mermaid Parade to enjoy. Whatever you do in Coney Island, you’ll be introducing your kids to a long tradition of fun, and that’s something they won’t fuhgeddaaboud!

Everybody loves strutting his or her stuff down the Coney Island boardwalk. (Photo: Ariel Chesler) 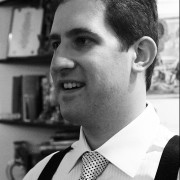 Ariel Chesler, a member of our NYC Dads Group, is an attorney and writer in New York. He lives with his wife and two daughters, and one cat.