Editor’s Note: With City Dads Group supporting increased awareness of men’s health issues during this month of Movember, we’d like to present this article our online community manager Ron Mattocks wrote about his battle with depression.

“I’ve been in a fog. A daze. A darkness that won’t release me. The longest depressive state I’ve ever been in. … That’s how it works — just creeps in and never leaves.”

“What’s worse than a dump truck full of dead babies?” my teenage niece asks me. I shake my head.

“Unloading them with a pitchfork,” she answers with perfect deadpan timing.

I laugh. I laugh so hard tears come from my eyes and my sides feel like they’re being gripped by a monster’s gigantic hand.

I haven’t laughed like this in four, maybe five months. I don’t know. It’s been so long I can’t remember.

I’ve been in a fog. A daze. A darkness that won’t release me. The longest depressive state I’ve ever been in. Still is. I don’t know yet. That’s how it works — just creeps in and never leaves.

My struggles with depression are not something I talk much about. As I recently told one well-known dad blogger who knows a little something about the topic, writing about my chronic depression isn’t what I want to be known for. There are some, like this guy’s ex-wife, who do talk about it, and they have a gift for helping others as a result. Then there are others for whom blogging about depression is their jam, and they play it like a harp for comments and page views. I am too afraid of coming off as the later.

Besides, depression is … depressing. Who wants to read about that all the time. Plus I’m a guy. Guys aren’t supposed to be depressed. We’re supposed to provide for our families, drive luxury SUV’s, and have hair like Don Draper. Either that or we’re supposed to be so slovenly stupid that our lone hope for survival is dependent on the female of our species.

Honestly, both extremes sound depressing to me. Either way, there is no middle ground, no spectrum of reality where a guy can say, “Hey, I’m so depressed, I’d rather shovel dead babies from the rusty bed of a 25-ton Caterpillar than get up and face another day.” Try using that line and not get some looks.

I’m of the opinion that it’s easier for a man to admit he is gay than it is to admit he is depressed. For one, the very term gay (to be happy) has depressed (to wallow in a pit of dead babies) beat by a long shot. Done deal. When opening up about being gay, most people (the non-judgey ones at least), pat the person on back and applaud his courage to be himself (and rightfully so). “Well, done,” they say. Mention that you deal with constant depression and you usually get an empathetic response followed by, “Are you on any medication?” The irony in this is that the depression is just as much a part of a person as is being gay for someone else.

To answer the question, yes, medication is involved. I’ve sampled the buffet on the dining car of the pharmaceutical crazy train. Sometimes it helps just long enough for you to get a few hours of work done, or to write a blog post, or to listen to your kids for a change or to sound completely normal to others, or perhaps not. It’s never the same, and the effects never last. Eventually you’ll pull back the curtain and see who’s still really running Oz.

Today I do something different. Today I go for a run. It kills me. My lungs are blazing after only a minute and thirty-seven seconds. People walking their dogs pass me. I am dying. I can’t see how this is supposed to be good for me. I try to forget about all the fears and worries as my feet pound (shuffle) against the pavement, and over the music from my iPod I hear my niece’s voice. “Hey Uncle Pookie, what do your friends have in common with a tree?” There’s a pause before the punchline. “If you hit them enough times with an ax they’ll both fall down.” I laugh again.

A version of this first appeared on Clark Kent’s Lunchbox. You can hear Ron talk more about his battle with depression and bipolar disease on The Modern Dads Podcast. 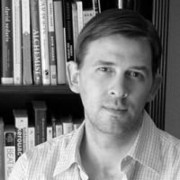 Ron Mattocks is the director of inbound marketing services at a business technology company in Ft. Wayne, Indiana. Prior to this he was a stay-at-home dad for a number of years which he wrote about in his book Sugar Milk: What One Dad Drinks When He Can’t Afford Vodka. Ron posts regularly on his blog, Clark Kent’s Lunchbox and represents the paternal perspective on the TODAY Show’s parenting blog. His drivel can also be found on The Huffington Post, Babble, The Good Men Project, and Houston Family Magazine to name a few. A comic geek and history nerd, Ron likes spending his free time dodging paintballs with his three sons.