One of the many lies about dads is that he “babysitting” his kid. A dad taking care of his own kid is ‘parenting.’ He’s being a dad. You cannot babysit your own child!

Dads have, as a group, never really been the bumbling idiots they’ve been portrayed to be in outdated advertising and lowest-common-denominator sitcoms — even if some men have found playing the buffoon is a good way to get out of what they saw as less-than-pleasant responsibilities. But the rest of us got the message a long time ago that we can do better than that, and we ARE better than that.

(Note: Dad being a goofball sometimes? Not the same. We can laugh at ourselves and not take ourselves too seriously, without being presented as some sort of drooling man-child.)

2. Dads are not naturally nurturing and capable with infants

One of the worst lies about dads. While women enter parenting with the benefit of an influx of hormones that may make them more naturally nurturing or help them bond with the baby quicker, most of what makes moms seemingly better at the whole parenting thing is years and years of conditioning. Your average new mom had been encouraged as a young girl to play with dolls, to learn how to care for babies and children, and to pursue babysitting jobs in expectation that someday she’ll have kids of her own. She has probably had friends give birth, and spent time with their newborns. Then, when her own pregnancy hit, she was flooded with advice and books and classes and baby showers and people from every corner of her life telling her “You can do this! You are going to be so great!” and fielding any and every question she could ever have. By the time the baby is born, she is as ready as possible and confident (even if terrified) that she was made for this.

Dad, on the other hand, has likely spent most of his life not being expected to have anything to do with babies. Chances are his own newborn is the first baby he has ever held, never mind been responsible for keeping fed and cleaned and alive.

So yes, there is a learning curve for dads that may initially be steeper than that of new moms. But if the dad is engaged and allowed to learn, he will quickly make up that ground.

3. Dads can’t be trusted around children (especially other people’s children)

Don’t fall for the most sexist of lies about dads. Dads, and men in general, are absolutely as safe as caregivers for both their own kids and other people’s kids. The suggestion that leaving a child in the care of a dad puts them at risk is completely false, and extremely damaging to that child’s perceptions about men. If you chose not to leave your child in the care of a man, let it be because he has given you a reason other than because he is not a mom.

4. Dads should stick to their main parenting role: providing money

Look, it’s never actually been the case that monetary provision is the most important thing a father contributes, and even less so now. Certainly there was a time when, because of how we had structured society, the only people allowed to make a living wage that could support a family were men. It made sense that being the breadwinner was a role a husband and father had to take on, and it was a vital one. But times have changed. Women are equally as capable finding success in the workplace and making an income that supports a family. Besides, there are far, far more important things that a dad “provides” for his family than money. Dads are not wage slaves just because they have XY chromosomes. Their worth is not counted by the dollars they make. What they provide in time, engagement, love, care, instruction, example, and encouragement are all exceedingly more important than their income.

5. Dads who show the slightest competence at childcare are “Super Dads”

For all that I do, I am not a Super Dad, even if I am often mistaken for one. Neither is the guy you see shopping at Costco with those adorable twins. And neither is that dad you saw at the table next to you at the restaurant who volunteered to take his toddler to the potty, or to go change the baby’s diaper. Those are just dads, doing what dads are supposed to do: be active and involved parents.

Let’s not continue this charade that the only thing dads will ever be is “in the way.” I was my wife’s birth coach, and more importantly her advocate, every step of the way during the birth of both of our sons. I got to hold her hand, and her leg, and on witnessing the arrival of our boys it was my reassurance that they were amazing and perfect that put her mind at ease. Seeing what my wife did made me more proud of her than I have ever been of another human. Most of the dads I know played similar roles. If it’s possible, let dad be there, and be involved. It will change his life and heart forever.

One of the more common lies about dads. I do only have sons, and don’t have even a smidgen of regret about that, but I can promise you that I would have absolutely adored raising a daughter or two. The days of men requiring sons in order to pass on their name, or their title, or their Valyrian sword, are either long gone, a tradition rather than a societal necessity, or were fictional to being with. Dads who love Star Wars or comic books or building projects in the workshop are not limited in their ability to share those joys with daughters. I will gladly point you to dozens of dads who live every day enraptured with the joy of being dad to a little girl.

8. Dads are a safe target for ridicule

Insulting stereotypes — some of which are discussed throughout the rest of this article — about dads and men in general have continued long past the time when similarly insulting stereotypes about other groups were laid to rest. Are there still sexist, racist, and homophobic stereotypes in popular culture? You bet. But those who call them out are more likely to be seen as advocates or much-needed watchdogs, whereas dads who call out negative stereotypes are still likely to be seen as whiners (at best) who can’t take a joke.

Often the worst culprits have been advertisers, who have traditionally excused it by saying their target audience is women. Besides the fact this is specious reasoning (after all, it is rightly no longer OK to target an audience of men to sell, say, tires, by making fun of women as dangerous or incompetent drivers) it’s also increasingly becoming clear that women are tired of seeing men portrayed as buffoons too — and, especially when it comes to parenting-related ads, are very drawn to images of men as nurturing, competent dads. It’s time to take the Doofus Dad right out of the advertiser’s toolkit once and for all.

In concert with the above, it’s time we put aside this silly idea that moms are the only ones who have any opinions, likes, or dislikes, when it comes to parenting decisions. If you need any more proof that dads have something to say about the whole parenting thing, ask yourself who made the blog you’re reading, or any of the hundreds of other “dad blogs” out there? Dads are writing, thinking, discussing, debating, and even attending conventions and summits, all the with purpose of being better dads.

A dad taking care of his own kid is “parenting.”  He’s being a dad. You cannot babysit your own child!

12. Dads who stay home to raise the kids only do it when forced by unemployment and are miserable

Certainly there are lots of dads who lost their jobs and stepped it up at home — as they should — but the majority of men who are in the role of “stay-at-home dad” are doing it because it was the best arrangement for their family, and most men discover that they absolutely love doing it.

13. Dads who are involved, competent and confident with parenting responsibilities are rare, and have sacrificed their masculinity to be that way.

Now that’s just one of the more stupid lies about dads. Almost a third of dads spend significant amounts of regular time as the primary caregiver of their small children, and you can bet that those that don’t often have to go it alone sometimes and manage to do it just fine. There’s no doubt there are far, far too many homes with absent fathers today. But in a home where dad is present he is almost always as involved and active a parenting partner as possible, often despite being treated like a secondary parent.

As to the idea that a man is emasculated by virtue of being competent at changing a diaper? I guess it depends on the man. But for most of us, nothing makes us feel like more of a man than when we serve our family. Period.

14. Dads who are primary caregivers for their children are being moms

I am not a “Mr. Mom,” any more than my wife is a “Mrs. Dad” just because she makes the majority of our family’s income working outside the home. My kids have a mom, and I am not her. Every time a stay-at-home dad is called “Mr. Mom” or is hilariously wished “Happy Mother’s Day” because of what he does for his family, it sends a message that caring for kids and the home is properly a job for women only, which pretty much insults everyone. Let’s end that now.

A version of 14 Lies about Dads first appeared on The Daddy Doctrines. 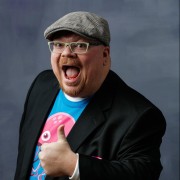