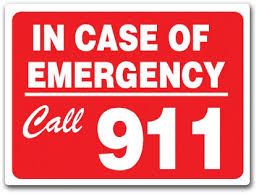 A teachable moment doesn’t always come along on the drive to school. However, emergency situations present themselves when you least expect them.

It was a good morning. We had plenty of time to get to school. We were probably five or six blocks away and the doors hadn’t even opened yet. So that is good.

Then I drove by a man, sitting in the street, and a hysterical woman.

I looked at what time it was and pulled over. The kids were deeply in trenched in Star Wars Angry Birds, so I turned on my hazards and walked over to the man.

He had just been hit by a car, and the hysterical woman was the driver. I assessed the situation, asked him several important questions (see sidebar at end) and then called 911.

The man was in good spirits even though I think his arm was broken, which in the grand scheme of things was pretty good. The driver, on the other hand, was having a full on panic attack. She had gone back into her car, and I tried to comfort her while having her teenage daughter stand guard to make sure the guy didn’t fall or get hit by another car.

Soon a fire engine arrived and I told the crew that it should send someone to take a look at the driver since she was in pretty bad shape. I wished the man good luck, and headed off to school.

I told my kids what I did, and that the man was OK and safe now.

And then I explained to them what 911 is and how it works.

However, I think the underlying lesson was this: If there is someone who needs your help and you can provide that help, you should.

And we still got to school before the doors closed.

Niel Vuolo is many things: a stay-at-home dad to two awesome kids, a writer, and a lifelong Mets fan from Queens, N.Y. Follow his adventures on his blog, Niel In Real Life and on Twitter at @NielInRealLife.