My father left when I was 6 years old. The age my son is now.

I don’t remember my father leaving. Did he walk out with a suitcase? Did they engineer it so he left while we were at school? I remember an argument, in the back bedroom with the door closed. I remember doing my little-child Saturday chores as the spring wind blew through the house, I remember that. But his exit, days or weeks afterward, is not something I recall, 45 years later. I don’t remember a day when he was suddenly gone.

There are things I do recall about my father. And I have the luxury of knowing where and when they happened because within a year or so, my mother remarried and we moved  away. The house where I knew my father as the man married to my mother, were I stood as a small child looking up at him, is gone to the place of dreams. Of memories that form themselves into long rafts of lost emotions. A place where, if I am lucky, I will go when I die.  I want to go there into that sunny back yard again and be ready to come when he calls. 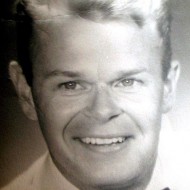 I still remember looking out the back window of the car as we drove away for the last time from the house I was born into, it’s garage door gaping open for some reason. The garage light still on as dusk fell. The freezer where I had gotten my frozen Tupperware ice pops standing open. That can’t be right. Why would we have left the garage open? Exposed to the world? Perhaps this memory is false. Based on what I knew to be in the garage instead of what was actually in my line of sight that summer evening. But the moment of deep loss, looking out the back window as the house receded and disappeared is the truth. Regardless of what exactly peoples the landscape.

I recall missing my father as the years passed. I recall missing him so much I thought I would simply give up and die. The missing was a vast blank space of yearning, of wanting his touch and his smell, so big, so huge that I felt lost in it for years. I remember a scratchy call from overseas from him one Christmas that we kids waited up for late into the night. I remember how empty that call was.

When children are forced to release something they hold dear, it cements into their memories the moments preceding it. The way of the world before that change. The smells and sounds. They hold onto what is gone with a feverish intensity. When a child loses someone or some place dear to them, you had best be ready to replace it with something warm and real, or you will haunt your child with loss.

Before he left, my father would sit up nights watching TV. My mother usually went to bed early, exhausted by the work of raising four children. She was unable to find the energy to be present with her husband after her children went to sleep. My father watched TV alone. My bedroom was just down the long straight hall. I shared it with my brother.

My brother was a sleeper. I was a listener. There in my bed, I listened to the house growing quiet. As my older sisters were put to bed. As my mother retired. Until my father sat alone watching TV. Some nights, my father would get up and make a milkshake. I could hear the blender in the kitchen. It would shut off and then, rising on bare feet I would go to the bedroom door, careful not to wake my brother. I would ever so carefully open the door and peek around the edge of the door frame.

There, down the hallway, he sat on the couch, a lamp beyond him, the warm glow backlighting him. And to this day I can see the warm glow there. I can see his silhouette. And as I peeked out, silent, he would turn and he would gesture to me. Then, I would enter the hall, quietly close the door, and race up the hall to join him on the couch.

There it would sit on the side table next to him. The extra glass. The extra vanilla milk shake. For me to sip, as I nuzzled under his arm to watch TV.

In Houston, in 1966, they had this thing called The Late Show. It wasn’t a national show. It was a local. It came on after the news. It think it was on channel 11. They showed old black and white movies. And as the show began, some Late Show artwork came up and a jingle played. The jingle went like this.

Those moments with my father carried me through some very dark times. He loved me. His warmth and his charm wasn’t enough to quell the demons that wrecked his marriage, but he left me with a sense that I was special. And that I was loved. Even now, when I sit with my son, after a divorce and after moving him out of the house he was born into, I remember the lesson my father taught me. That the love of a father can heal wounds and fill the emptiness of loss. Even when that very love itself is what is lost.

And so, I hold my son close. I’m not leaving him. I’m with him. And I try to remember to be the man on the couch that wants him to peek out his door. And I think back to my father, young and strong and full of confusion. Still finding a moment for me.

On the couch as the Late Show began, there was a black and white graphic of a city with a big moon above it.  A magical city where my father and I sat drinking our milkshakes. I felt in those moments, leaning against my father, that the world couldn’t be more perfect. It’s funny that all these years later, I can still sing that song. I still can see down into that glass, where the vanilla milk shake floated in chunks.

But I can’t see him leaving.

Emmy® winning animator and author Mark Greene blogs about kids, relationships and politics. Read Mark’s children’s book Flatmunder, about kids fears and the power of play for FREE RIGHT NOW on ISSUU. This piece was republished with permission from Mark. Photo by Steve Johnson on Unsplash.