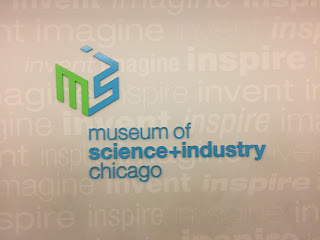 Last month my family slept under a Tesla Coil, and we lived to tell the tale!

Although I haven’t run my family through a Geiger counter recently, I’m pretty sure that there will be no radiation burns.

We spent the night at the annual Camp-In of one of the best museums in the country,  Chicago’s own  Museum of Science and Industry.  This was our first time doing so, and I don’t think it will be our last.

But first, a little backstory.  This is one of our favorite museums and had been even before we moved to Chicago.  Once a year, we’d make a pilgrimage from New York to Chicago to the MSI, to see the humongous train set of Chicago, the giant doll house, walk inside the coal mine, and take the tour of the giant submarine.

BEST MUSEUM IN THE COUNTRY

Even at some of the admittedly great museums we’ve been to, including the Queens Science Center, the Philadelphia Children’s Museum, the Franklin Institute, etc., MSI Chicago is the standard by which all others are judged.  We figured out that being a member is a great deal!  (If you plan on visiting the museum more than twice in a year, and you drive there, you will do better to be a member than not.  I did the math.)

But we’d never taken advantage of this special member opportunity. Once a year, the Museum stages a camp-in where 600 lucky people get the opportunity to spend the evening at the exhibits. Members get to select sleeping spots next to many of their favorite exhibits, there are smores and music and giant sized games, and more importantly, the museum is open until 11 pm, so you get to go to all of the exhibits you want, relatively uncrowded, and at your leisure.

This is apparently a thing for Chicago museums.  I did a little research and it turns out that same night, the Planetarium was having an event as well, and the Aquarium, the Zoo, the Field Museum, and the Chicago Cultural Center all have similar programs.) Furthermore, it turns out that the Museum has a similar event coming up called the Snoozeum.    I don’t think you have to be a member for this one, and it seems like it is much more crowded.  Next one is December 15.   Find out more here.)

After we made plans for the camp-in, my son’s class planned a field trip to the museum for the day before.  We were already planning on surprising him, so we kept it up.  He would never suspect.  During the field trip, as I brought him and his 4 classmates around, we couldn’t see everything he wanted to see.  “Next time we go, ” I kept telling him.  He didn’t realize the next time would be literally the next day.  Later that night, reviewing the field trip after dinner, I jokingly told him that the museum was so big that we could sleep there and still not see everything!  He laughed, not knowing that less than 24 hours later he’d be doing just that!

SLEEPING UNDER THE TESLA COIL

We checked in around 6 pm, brought our stuff over to a potential sleeping area, and started exploring the museum.  In addition to my son, we brought his older cousin, who also had a fantastic time.  Dinner was in the cafeteria, which serves surprisingly good food, and where one of our favorite exhibits is (The Rube Goldbergesque Swiss JollyBall Machine. )

This is not my video, but a pretty good look at the jollyball apparatus.  We watch this every time we go to the museum!

Many of the exhibits you still needed to have timed tickets for, although they were all included in the price of admission.  In the one night that we were there, we saw The Mirror Maze, the U-505 submarine, the chicks, the bike exhibit, the extreme ice exhibit, the circus exhibit, the body exhibit, the kid’s imagination center, and ended our evening with a late night tour of the Coal Mine.   And of course Jollyball.  Even after seeing that, we didn’t see everything-  we didn’t go over to the space center, see the trains, the smart house, the fairy house, or see the brick by brick lego exhibit. (we had seen that the day before)  The Robot exhibit had not yet opened, sadly.  It’s open now, and it looks fabulous!

What was great about all of these is that because the museum was so uncrowded we could still see all of those things and take our time about it.  We normally only see about half of that in a museum exhibit.

Some things to know if you go next year.

Overall, it was a great experience, and we would do it again!

And we are also planning to sleep around (at the other museums!)

Find out more about the Museum on their website http://www.msichicago.org

(Read more about this and Adam’s other adventures at www.dadapalooza.com.)

Adam Gertsacov of our Chicago Dads Group is an actor, clown, director and full-time dad. In addition to blogging at Dadapalooza.com and Clownlink.com, he and his wife are the founders of the Digital Family Summit, a first-of-its-kind annual conference where teens, tweens and their parents connect to learn how to live as a family in the digital world.