Members of the NYC Dads Group recently left New York City entirely … to travel to the Marvel Universe Live. And what a tremendously fun trip it was.

Marvel Universe Live, coming Feb. 22-25 to the Barclays Center in Brooklyn and nearby locations in March, is a show about Marvel superheroes such as The Incredible Hulk, Thor, Captain America — only one of the hottest and most well-known comic book properties ever. Our evening included a behind-the-scenes look at the show. We met the performers, learned how they did their amazing moves, and participated in all kinds of awesome activities. What’s more, our dads and their children were given a chance to fight alongside their favorite heroes.

Are you worthy of the power of Thor? (Photo: Lance Somerfeld)

A selfie station with props, including Iron Man’s gauntlets, Thor’s mighty hammer and Star Lord’s mask, proved popular with all. You also could get an up close and personal look ar Dr. Strange’s Cloak of Levitation and many other costumes from the show, or learn how to manipulate a flaming globe on a rope, and more.

There is no better teacher of hand to hand combat than the Black Widow herself! (Photo: Lance Somerfeld)

The performers were friendly and approachable, and helped the children learn various fight moves. One by one, every boy and girl got to strut their stuff in hand-to-hand combat, and even learned how to duel with swords!

Kids would see that they could be superheroes too, and finally know what it’s like to toss around the bad guys, and save the day with heroic feats of derring-do, no matter how small they might be.

They even put on a parkour display, flipping and tumbling over objects like superheroes do. Parkour, or “free running,” if you haven’t seen it, is an amazing way to move your body, and this writer has long wondered why superhero films don’t hire parkour professionals to portray Spider-Man, Daredevil or Captain America as they leap and tumble on the rooftops of New York City, or as they battle their way across an alien landscape.

Full disclosure: This writer tried his hand in the acting field a long time ago, and a lot of the reason I wanted to be an actor was for the action sequences, fighting the bad guys, running and jumping through dangerous environments, and so on and so on. I was certified in Stage Combat, and did minor stunt work, too. I figured I’d see nothing here that I couldn’t do.

Welp. I’ve been wrong before, and I’ll be wrong again, so it wasn’t a surprise I was wrong about this. These performers were miles beyond anything I’d ever been capable of.

Nik Nieves, the show’s fight captain, told me that he holds several degrees and certifications in martial arts, just to start. He is also required, as many of the actors are, to play the roles of many characters in the show. He could be Dr. Strange one night, and Iron Man the next, he said, so he and every performer had to learn the choreography for pretty much all the characters to be ready for what came next.

As for the performers’ training regimen, to say it’s superheroic would be an understatement. We regular mortals would not be able to keep up, although it’s assured to make you lose your dad bod.

The Guardians of the Galaxy! (Photo: Chad R. MacDonald)

To put the show together and running smoothly, James Hadley, director of Marvel Universe Live, assembled an “Action Team” featuring a fight director, a stunt director. and an aerial choreographer.

“We worked closely with Marvel to make sure that characters who had only recently debuted in the films and shows, or had movies coming up, were featured in the show, so Black Panther has a big part, Iron Fist appears, and The Wasp shows up as well,” he said. “The other exciting thing is that we’ve put together both The Avengers and the Guardians of the Galaxy … We use the voices from the cartoon shows, so the characters all sound very familiar to the fans, kids and adults alike.”

Marvel Universe Live is more than just a “fight show,” said Hadley, who used his background with Cirque de Soleil to incorporate plenty of aerial work and acrobatics into the performance.

“I was looking for specialists who could do aerial work, stunt work, martial artists, and then we needed to cross train them, because an aerialist might not be trained in martial arts, so we took them to our Marvel Boot Camp in Florida where they learned different types of fighting, stunt work, and even fire manipulation, and they came out with all of these different skills,” he said.

The incredibly tall Groot takes on a battalion of soldiers all by himself. (Photo: Chad R. MacDonald)

Marvel Universe Live plays Feb. 22-25 at the Barclays Center in Brooklyn with tickets starting at $30, a train ride away in Bridgeport, Conn., on March 1-4, and at Nassau Coliseum in Uniondale, N.Y., on March 22-April 1. The show runs about an hour and 45 minutes with an intermission in between for when the kids start getting itchy, which is ideal for most parents. You can click HERE for tickets.

No question about it, Marvel Universe Live is fun for the whole family! (Photo: Chad R. MacDonald) 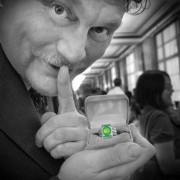