Can you imagine having a pet rhino? Well, there’s a new children’s book about such a thing.

My daughter and I recently attended a party celebrating the book Chizi’s Tale, which is based on the fascinating true story of an orphaned, endangered black rhino who lives with a park ranger and his family before returning to the wild. What also makes this book remarkable is that it was written by a 18-year-old, Jack Jones.

The writer’s daughter with Jack Jones, the 18-year-old author of “Chizi’s Tale.”

Jones was moved to write a book about Chizi after hearing about a black rhino who lived as a member of a family in Africa. At the event, Jones said, “As soon as I heard about this story, I thought to myself, for lack of a better word, ‘Wow!’ Most people think of an iguana as an unusual pet. But, can you imagine a one ton iconic beast living in your home amongst your children eating out of your dog bowl? In all seriousness, this is a tremendous story, and I thought it had to be shared with the outside world.”

The event itself was very kid and parent friendly. Lots of temporary tattoos, animal themed hats, coloring, and even face painting took over the lobby of Manhattan’s Carlton Hotel. There were countless smiles, lots of hugs, and that was even before we heard from the publisher and author.
The event provided all attendees a copy of Chizi’s Tale, a plush rhino, as well as information about the organization, Tusk.org, a nonprofit that funds conservation efforts in Africa. All proceeds from the sale of Chizi’s Tale go to Tusk.org.

I’ve read Chizi’s Tale several times to my daughter over the last few days. It’s a wonderful story and supports an amazing cause. Head to the Chizi’s Tale website to learn more. 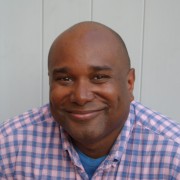