THE” Jason Greene receiving an NYC Dads Matter Award from Mayor de Blasio as part of the The Mayor’s Fatherhood Initiative.

A few weeks ago, I was at Gracie Mansion for an unusual, progressive, and inspirational event.  The NYC Mayor’s Fatherhood Initiative were hosting their annual celebration of fatherhood: the “NYC Dads Matter Awards.”  This year hit me right in the feels as I sat in the crowd with my family to cheer on a friend and fellow NYC Dads Group member, Jason Greene. Jason, an active at-home dad living in Queens, has overcome some extreme challenges in his life, and was being recognized along with nine other well deserving honorees for becoming positive and consistent influences in the lives of their children. New York City Mayor Bill de Blasio was on hand along with Alan Farrell, Fatherhood Services Coordinator to distribute the Mayor’s Fatherhood Initiative awards.

Most amusing moment of the evening: Lance’s son charging over to the Mayor to inquire how tall he is.  See photo below. Answer: six feet, six inches.

The Mayor’s Fatherhood Initiative, NYC Dads, was established in June 2010 to strengthen New York City’s families by helping dads take a more active role in their children’s lives.  The goals of this exciting program include making all City agencies as “father friendly” as possible and championing the message that dads matter.

We realize that fatherhood is front and center in the month of June with the climax surrounding Father’s Day. Consequently, we congratulate and applaud the Mayor’s Fatherhood Initiative that work diligently to make New York City a more ‘dad’ friendly place to work and live each and everyday. 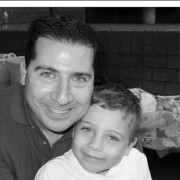