The recent death of Brian, the Griffin family’s much loved talking dog in Family Guy, had me pondering how I’ll explain the death of a pet to my daughter, Sienna.

I grew up in home filled with animals (not all at the same time) – a dog, cats, gerbils, hamsters, salamanders, lizards, turtles, fish, birds, a guinea pig (pray that you never have to hear the blood-curdling screeches of a guinea pig having a stroke), even a fiddler crab that decided to climb out of its tank and somehow made it down the stairs before realizing it was a fiddler crab and needed to be in water. There was a lot of death, but none so impactful as the loss of our dog and our cats.

Peanuts, our only dog, was adopted before I was born and lived 13 years. I think she died when I was 10 or so. I remember my mom bawling outside the vet’s office when we put her to sleep, but I cannot recall how she explained it to me. My dad misses her every day.

We adopted our first cat when I was around 4. I named him Twinkles. (Hey! I told you was 4! Besides, he was rechristened “Fat” because as an indoor/outdoor cat, he decided to go down the street for food and then come home and eat some more. He weighed more than 30 pounds!). I don’t remember how long he lived, but I was hysterical when he was found dead near our neighbor’s house. Timothy, our next next cat, lived about 13 years and into my 20s. He developed kidney failure and we kept him going on IVs for months because he wasn’t in pain. My mom still keeps pictures of Timothy and her next cat, the late Ferris, on the fridge.

For me, the sudden death of my cat, Zeeb, at age 9, was completely traumatic. I was in my mid-30s when it happened. He was diagnosed with cancer and went within weeks. Overnight he went blind and the awful wails when he tried to jump on the bed but jumped in the wrong direction and missed still ring in my ears at times. It took me a month to throw out his chair and after doing so I developed unexplained migraines. They went away when my wife Elaine mentioned the connection between their onset and me throwing out the chair, but it wasn’t long after that that I had my severe nervous breakdown.

You see, Zeeb was intuitive and got me through some terrible times. He knew when I was feeling down. He’d climb on me and purr almost immediately. That type of unconditional love is amazing and I guess his death pushed me to the psychological brink.

Sienna’s growing up with two cats – Zeeb’s brother, Gleeb (14) and Minky (4). Cats can live 20 years or more so it’s possible Gleeb will be around until Sienna’s 6 or 7. Minky, who shares the same intuition Zeeb possessed, will hopefully live a lot longer. I have no idea how I’ll explain their deaths (or my own devastation) to Sienna. I guess a lot will depend on her age.

Do I explain life and death to her?

Do we hold a formal funeral like they did on The Cosby Show when Rudy’s goldfish died?

One thing I do know – there will be no sitcom-style “must find an identical replacement” antics.

A version of this post first appeared on Raising Sienna. 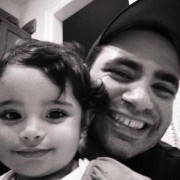