“There’s no way I’m going to that. They have a room called ‘vagina village.’”

That’s what one of my dad friends said when I invited him to a conference called MommyCon that was happening in NYC earlier this month. I didn’t even argue with him because years ago that would have been my response.

I had been asked by my crew at the NYC Dads Group to host a playdate/ meetup for dads there. If they would have asked me 10 years ago, I would have said “hell, no.”

Just like my friend, I didn’t understand why dads needed representation at a “mom event.” I actually used to see it as a little feminine.

Thank goodness I have grown so much since having a child. I couldn’t say no to this opportunity. So off we go, here’s why you should do the same if you have the chance.

Dads go to parenting events, too

Has your wife or significant other ever begged you to go to an event full of women?

My wife always used to invite me and, even though I didn’t want to go, I always went. I was curious and always felt that the worst-case scenario would be that I would spend time with my wife and kids. Plus, I could complain like a madman later if I didn’t have a good time.

However, every time I went with her to a mom event, I was never the only guy there. In fact, I always saw more males than I thought would show up even if there’s barely anything for us to partake in.

That’s why MommyCon NYC offering a dad’s lounge was a huge deal. Now all of these fathers would have somewhere to go and something to do rather than wandering aimlessly behind their boos.

It’s not a play date, it’s a dad’s lounge

I hate the term “play date” and bet you many dads also hate it. Tell a man that you want to have a play date with him and his kids and 90 percent of the time they will straight up laugh at you.

So instead, we were host a “dad’s lounge.” We were men chilling, talking and sometimes only saying things we felt comfortable saying near other men. We got a group of dads who never met each other before to come through and hang with us.

Without a dad’s lounge, dads get lost in the crowd of moms and baby gear. Chances are they might not ever show up to an event like this again unless they feel welcomed. Our dad’s lounge made them feel important because they were. 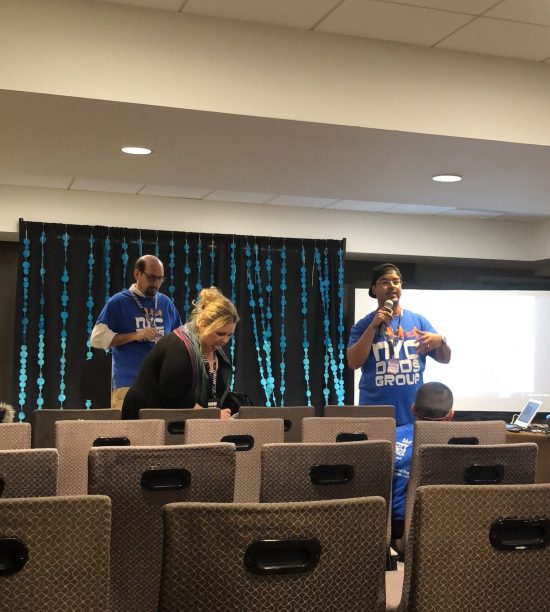 When asked if I could host the dad’s lounge, I didn’t even think twice. I didn’t exactly know what I was getting into and didn’t want to embarrass the fellas at a huge event like MommyCon.

Lance Somerfeld, co-founder of NYC Dads Group and it’s parent, City Dads Group, advised me to “just have fun.” That’s all I really needed to hear.

It doesn’t sound like much but I wanted the women of MommyCon to get jealous. I wanted them to say, “Damn, all those dads are having some fun. I want in.” I wanted dads to feel comfortable but I also wanted to show everyone in attendance that dads matter.

Dads can be dads when a dads group represents

With the help of the NYC Dads Group and MommyCon, dads were able to hang out together in a comfortable setting.

I didn’t see one dad come into our dad’s lounge and just sit there doing nothing. Every single dad talked to each other and had fun being in there. Cool things happen when dads see another dad looking out for them. I don’t think that would have happened without having a dad’s lounge there. Some mothers even wanted in on the fun.

Some dads might not remember each other’s names from that day but they will remember our get together. Dads need that camaraderie even when they don’t know they do.

Thank you MommyCon for treating us like equals on your special day!

A version of this first ran on Cool4Dads. All photos courtesy of James Lopez.