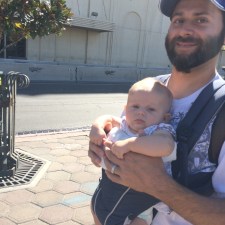 Babywearing in Las Vegas was something I always planned on doing. It seemed like a great idea. Your child was right next to you, gaining comfort in hearing your breathing and in feeling your heartbeat. It would leave my hands free to shop, do dishes, or fold laundry. I’d be the coolest Dad on the block, really showing my friends and neighbors “how it’s done.”

Then came the day that my wife’s doctor told us the two words that would shatter that wonderful babywearing image: “It’s twins!” How was I going to manage to carry two babies? One on the front and one on the back?

My ideas of being the hippest dad in the neighborhood because I was wearing my baby changed to thinking I would be the most unique, being the only one with twins. Any thought of babywearing I had kind of disappeared. 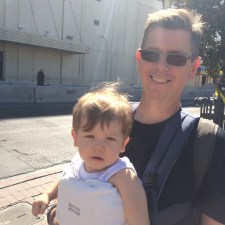 When I heard about International Babywearing Week, and found out that the dads group I helped start here in Las Vegas could be part of a nationwide event I was excited but still faced with the dilemma of what do I do with the other baby? If I wear only one, the other is going to get mad that he’s not being carried, and if I try and have them take turns … well, they’re just shy of 2 years old. You KNOW how THAT’S going to go. Thank God for grandparents, as one got to spend the day with them, while the other helped me celebrate the babywearing holiday in style.

Imagine: More than 100 dads in 13 different cities, all wearing their babies. Five of my fellow Las Vegas Dads met me downtown on the morning of Oct. 9. We parked at Main Street Station, walked up to the Plaza Hotel and then began our journey down Historic Fremont Street. The response babywearing in Las Vegas was incredible. One man, a former stay-at-home dad, even asked to take a picture of us.

At one point, I saw people I knew and they failed to recognize me with a baby on my chest. (Note to self – great disguise if I ever plan a bank robbery). We made our way down to the container park where the awesomeness continued. We let the kids play at the treehouse for a bit while we rested and talked about the trip so far. 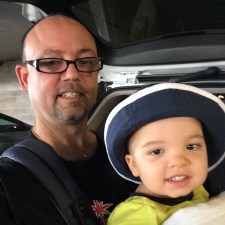 After our break, we headed back to our starting point and said our goodbyes. I think I speak for all of us when I say the experience was great and the response incredible. I was happy because we had just ended another successful meet-up. The guys in the group were happy for the same reason, I’m sure, but they also got to bring home their baby carrier. (Thanks, Britax!) I hope they continue to use it.

As for my twins and I? As much as I enjoy spending time with them both, having just one for a day has opened my eyes to how special and important one-on-one time is and I think I’m going to try and schedule more of it. That means the baby carrier is going to come in handy, and Grandma and Grandpa can expect another visitor real soon!