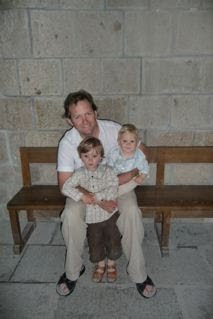 The interview series continues with an-home-dad living in Guadalajara, Mexico. Here is another caring & involved father sharing his honest accounts of the at-home-dad role. I believe these interviews enable other dads (and moms) out there to hear some of the truths about this growing trend. Here is a “spotlight” on David (pictured above), father of two toddler boys, Gavin and Quinn. Originally from the San Francisco area, he has been home with Gavin since he was born, first in Argentina then for the last 2+ years in Mexico. NYC Dads Group member, Jeff G., was responsible for connecting David & I for this interview. Jeff said that “I’ve enjoyed listening to David detail the joys and tribulations of raising kids overseas, and I’ve called him many times for advice. I imagined him as being, to borrow something from the New Yorker, our “far flung” stay at home dad – Contrasting his experience with the NYC experience would be interesting for other dads to hear.” I completely agree with Jeff, so Below is the Q&A between David & I.