Summer may have gone by in a blur, but we were lucky enough to have gained a few memories that will last a lifetime.  We live with a little rail enthusiast who seems to have been born with an intense love for all things that run on rails. So we decided to indulge him with a 9-day cross country train trip by flying out to Seattle and taking the Amtrak with children back home to New York.  I had neither done nor considered anything like this before, but we thought it would be a great way to introduce our 4-year old son to the country beyond our island here on Manhattan.  As a father, it’s really important to me that my son grow up knowing that there is more to life than living in a concrete jungle.

After weeks of meticulous planning, we flew out to Seattle along with my parents to start our journey.  Our plan was to board Amtrak’s Empire Builder to Chicago and then Amtrak’s Lake Shore Limited back home to New York.  In between, we’d get to see some beautiful country and stop for a couple days in Montana’s Glacier National Park.

No matter what you may think about the rain, Seattle is real gem and I can see how it is a great place to live.  For the adults, we enjoyed fresh seafood in places like Taylor Fish Farms and Pike Place Market along with the natural beauty of the northwest.  For our son, all he cared about was taking all the various types of transportation options that Seattle has to offer: street trolleys, the 2-minute ride on the monorail, electric cable buses and the light rail from the airport.  How we were getting somewhere was more important than where we were actually going!  Regardless, the highlight of our brief stay was definitely The Center for Wooden Boats, where we enjoyed a  50 minute sail out on Lake Union for FREE.  That’s right, gratis!  Where could you find that kind of deal new New York City? Also worthwhile was the Ballard Locks and fish ladder.  Think of it as a miniaturized Panama Canal where the kids can watch all kinds of marine vessels go by.  All my son could talk about was jumping onto the boats so it’s a good thing we took him sailing.  The fish ladder, which allows salmon to pass through the locks on their way upstream to spawn, also included an observation window where you can literally watch thousands of salmon swimming by.  It was a first for us all. 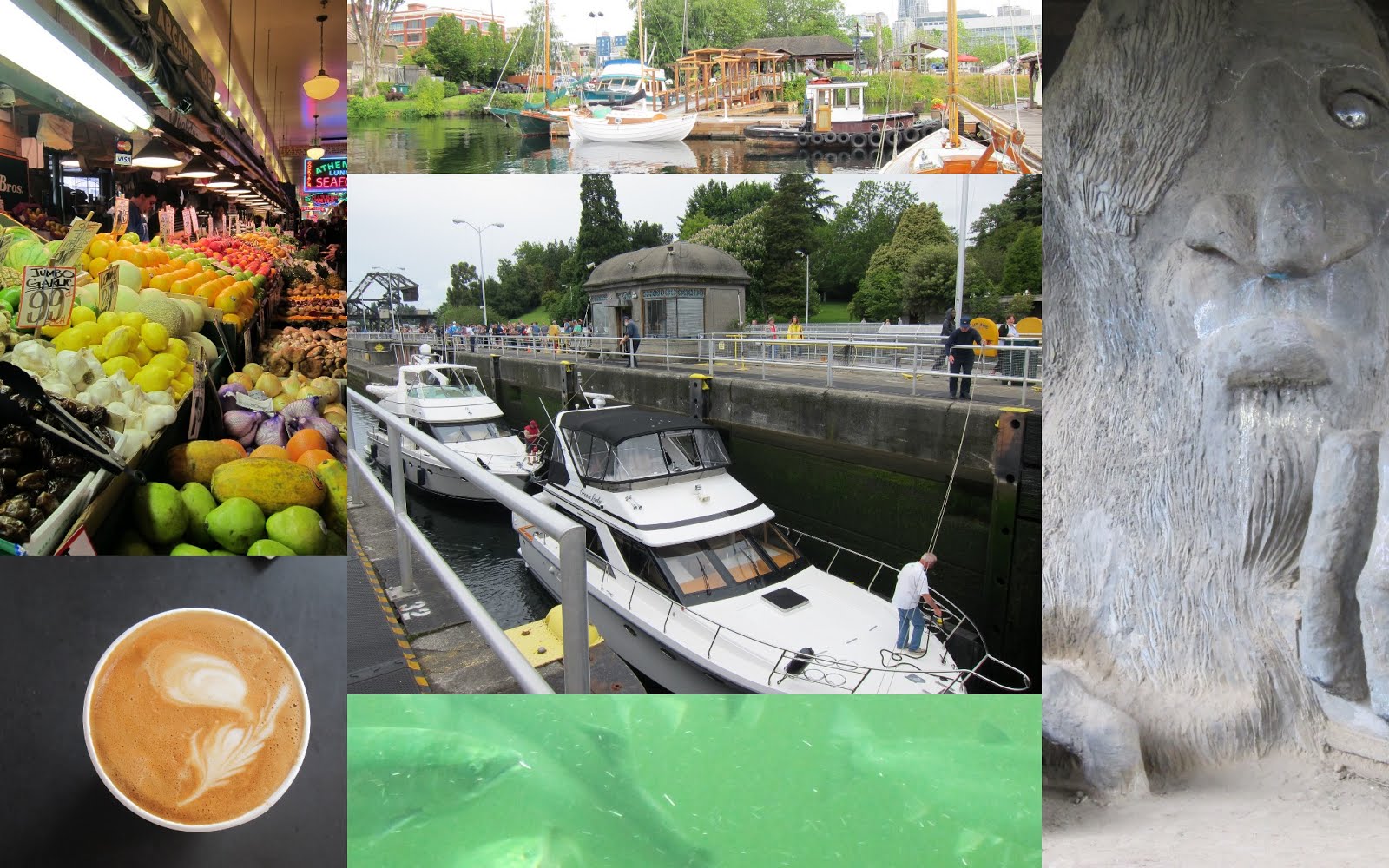 After two days in Seattle, the anticipation of getting onto the train was reaching a fever pitch. Our son was asking every 15 minutes for updates on when it would be time to go.  Check-in was surprisingly quick, so we ended up with 2 hours to kill at the train station.  Though he steadfastly argued against leaving the station for fear of missing our train, the last call for enjoying Seattle’s amazing coffee was too much to resist.

We boarded Amtrak with children in tow, met our very friendly porter and entered our rooms. Being on the train just made everything more exciting to our son and there was plenty to keep him amused.  He spent the first several hours running up and down the hallway between our room and my parent’s room, as the simple concept of having a room on a train was thrilling to him!  Outside the window, the majestic and ever changing landscapes offered unlimited opportunities to stare.  Oceans, rivers, mountains, deserts, snow, prairies, cities, towns, feats of engineering… we could see it all right outside our window.  Eating on the train was equally fantastic.  The mac and cheese may have come out of a Kraft box, but to our son, being on a train made it taste better.  Our iPad was loaded with many books, games and music in preparation for the many hours of downtime, but we didn’t need it nearly as much as we thought we would.  The train also had an observation car, which provided both a place to look at the views and meet new people.  Our son managed to meet a playmate to pass the time for a few hours.  The dining car, which does communal seating, was also great for meeting new people and hearing stories from different walks of life.  Where else could you meet a geophysicist on his way to a lute festival in Wisconsin?

The rooms themselves were pretty small; think half the size of a cruise cabin.  But even then, it was comfortable and much preferred over sitting in coach!  Our sleeper room included a private bathroom, shower, sink, couch, solo seat, retractable table and a large window.  We had two rooms next to each other so they were able to be combined into one larger room.  The hallway windows just outside our cabin door allowed us views from both sides of the train.  For the night time setup, the couch folded down into a bed that was a little wider than a twin, but well smaller than a full.  Amtrak claims that two adults can sleep on the bottom, but it I’m not sure how comfortable that would be if the other person was anyone besides your significant other!  However, it was ample room for my wife and son.  I took the top bunk, which folded from high in the cabin into a twin sized bed.  The night time setup is tight and intended only for when you are sleeping.  Given the rockiness of the train, it did seem a bit unnerving on the top bunk but the security straps were enough to keep an adult from falling down (but not a child!).  The bathroom compartment was also tight and the hand sink was located inside the sleeping cabin rather than inside bathroom compartment itself.  The bathroom compartment was like a more compact shower stall with a toilet inside it.  Basically, the idea is you sit on the toilet with the lid down and wash yourself off with a handheld shower head.  Since we only ever spent one night on the train at a time,  no one ended up using the shower and we all just waited until we arrived at the next hotel.  Tight or not, a private bathroom and sink is worth it on a long train trip!

We arrived in Montana and continued scratching off the “firsts” for our city-dwelling son (and my wife!):  seeing snow capped mountains, fishing, rafting (more like drifting) down a river, seeing bears and mountain goats in their habitat, stepping into ice cold lake water, witnessing a double rainbow, breathing fresh mountain air and drinking fresh mountain spring water!  Words and pictures cannot accurately describe the enormity and beauty of Glacier National Park.  Even though my father insisted that the mountain goats we saw were fake and installed by the Parks service, Glacier is a can’t miss if you’re ever in the area.  Don’t miss Going to the Sun Road as there is plenty to see right from the car window.  For the young and the elderly, there are nice, short walks (around one-mile long) that are easily accessible from the road.  If you want to stay inside the park, rustic Many Glacier Hotel is well worth the money with its prime location right on a lake and its million dollar views of the mountains.  We got off the train at Whitefish, MT, which is a decent sized town with a suburban feel that is fed by tourism all year round.

After getting back on Amtrak with children and continuing east to Chicago, we hit a snag: derailment!  Not our train, thankfully. A freight train ahead of us derailed and the line was impassible.  There were no injuries, but we were delayed 8 hours.  Our son was a real trooper and I think the whole experience was all the more fascinating to him.  We were loaded onto buses (yet another form of transportation) and driven around the accident, where we could see it in plain view.

The derailment provided weeks worth of talking points and seeing it was proof positive to my Mom that Amtrak was not making the whole thing up as an excuse for being late.  The astonishment of seeing ripped up rails and train cars toppled on their side ended up being one of the most memorable parts of the trip for our son, who talked about it often afterwards.

We reached Chicago, our final stop.  The return to city life was welcome and we spent most of our time reconnecting with friends and eating deep dish pizza.  Chicago may be called the second city, but it when it comes to architecture, it is second to none.  It seemed like there was some quirky looking building or piece of artwork to gawk at every other block.  The highlights and for our son included an architecture ride on the Loop, a beach on Lake Michigan (Loyola Park) and the Crown Fountain at Millenium Park.  Even though our son didn’t find it too interesting, we thought that Cloud Gate in Millenium Park, which is right by the fountain, was pretty awesome as well. 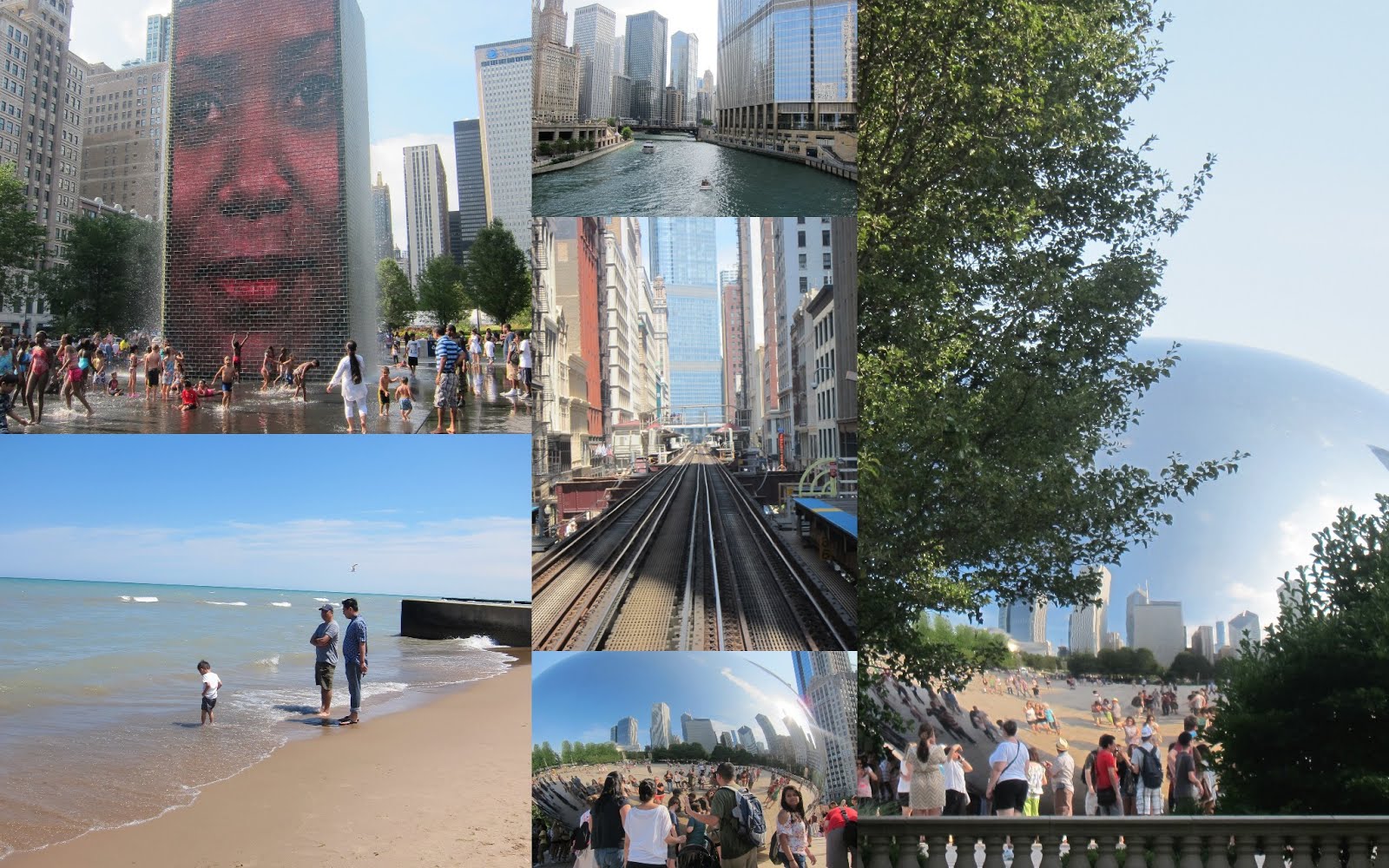 It was time to go home.  We jumped on to the next Amtrak with children adventure, the night-time departing Lake Shore Limited eastbound for New York City.  The condition of this train and type of staff was markedly different from our experience on the Empire Builder.  While the Empire Builder seemed to have a strong inclination towards tourists, the Lake Shore Limited had a much more commuter feel to it.  The train was much older and didn’t feel as clean or cozy.  On the positive, there were actually more windows in the room.  The Lake Shore Limited is known to offer wonderful views of the Great Lakes en-route eastward before it turns south into New York City.  Unfortunately, I can only go by what I read, because we ended up sleeping right through all the scenery!  By the time we woke up at 11am, we had missed the lakes and our breakfast and we were surrounded by unspectacular views of nothing.  Oh well, at least we got some much needed sleep!  Once we made it to the Hudson river, the scenery turned beautiful once again.  However, being New Yorkers, it was all familiar to us and being so close to home just made everyone itchy to get there as soon as possible.

Finally, we pulled into Penn Station, which regretfully was the worst train station of the trip.  Even worse than half-built King Station in Seattle.  So much for New York being the capital of the world.

The trip was an amazing experience and everyone, from our 4-year old son to my 73-year old father had a great time.  If you’re thinking about giving it a try and I could offer a few tips of advice:

If you can afford the time and the cost, a cross country train trip is definitely worth a try!  Our son has already picked out the next Amtrak line he wants to take and I’ve started collecting Amtrak points to pay for it.

Edward Yau is a geek dad that writes code for his kid. Follow Ed on twitter @daddycoder.