Jerusalem’s snowstorm of the century began with a toast. My mother-in-law, Jean, was visiting us, and I had bought a bottle of her favorite local wine and a bouquet of flowers to mark the occasion.

As Jean and I partook a second glass of a delicious pinot noir, my wife, Debbie, was hit by a pint-sized rocket.

Our unborn daughter’s hand had left a deep imprint on Debbie’s belly.

In the seconds following that monster contraction Jean moved with all the swiftness of a cheetah. She called for a taxi, packed up Debbie’s hospital bag, called her husband, e-mailed half of the Jewish population of her hometown, and watered the red cactus we had on our terrace.

Cut to Debbie and me in a fast-moving taxi, being driven by a sullen young man. “Just breathe, I said. “It took Tamar (our daughter) 26 hours to be born. Hold my hand.” Debbie and the taxi driver exchanged a glance that communicated miles: “This schmuck has no clue he’s gonna become a father before that traffic light turns red.”

The hyperventilating cabby blew into the ER entrance. “Get her a wheelchair!” he yelled. I leaped out of the taxi and returned in eight seconds flat with a wheelchair. The taxi driver floored it, racing off into the suddenly blustery night.

With the cab’s exhaust fumes still lingering in the chilly night air Debbie gave birth in her tights to our second daughter, Yarden Tilli Lotte.

Elated, I walked all the way home to our four-story Jerusalem walk-up. I was sleeping the deep sleep of a happy, relieved father of a healthy newborn when my cell phone rang.

It was Debbie. She was trapped in a room with an orthodox Jewish woman whose father-in-law had bellowed nonstop all day, calling everyone and his uncle, looking for a way to get his daughter-in-law, and latest grandchild transported out of the hospital back home to the city of Bnei Brak about 40 miles away. The fact that the Israeli Ministry of Transportation had announced that all roads in and out of Jerusalem were closed was little more than a detail to work around.

Now it was dusk, and this grandfather of 16 had shifted from yelling in English to whispering frantically in Yiddish about God knows what. Debbie had pleaded to be transferred to another room, but with Jerusalem about to reap the whirlwind, the entire city was in lock down, and every hospital bed taken.

I had to move, right quick. The roads were impassable, so I trudged through the snow-covered streets of our neighborhood, carrying an empty bassinet, sticking my thumb out for a lift to the hospital. The streets were empty, except for one intrepid, or seriously confused, traveler who had braved the elements, saw me, saw my bassinet, and gave me a ride all the way to the hospital.

I rushed into Debbie’s room, bundled her up, picked up our baby girl, and the three of us made tracks.

The arrival of our beautiful, round baby girl with the big brown eyes and forearms like a sailor ushered in the storm of the century. Yet Yarden Tilli Lotte’s entrance onto the world stage wasn’t completely chaotic: she was born 46 years to the day after her grandparents, my wife’s mom and dad, had created the beginnings of a storied love affair by swapping ‘I dos’ at the Highlands North Synagogue in Johannesburg, South Africa.

Sometimes, the line between chaos and creation can be blurry – but it sure is beautiful. 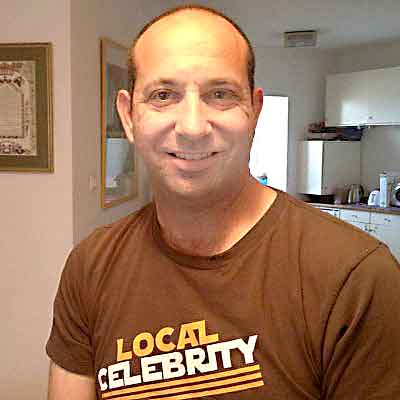 Gidon Ben-Zvi is an accomplished writer who left behind Hollywood starlight for Jerusalem, where he and his wife are raising their four children to speak fluent English – with an Israeli accent. Ben-Zvi’s work has appeared in The Jerusalem Post, Times of Israel, Algemeiner, American Thinker and Jewish Journal.

Photo by Laura Garcia from Pexels