If I couldn’t contribute to my family, couldn’t care for my daughter, then I shouldn’t be here anymore. I started writing a letter to my wife and children.

As summer neared its end, it appeared no teaching positions would be available for me in the Chicago public school system that upcoming year. I had to look at my options.

I relished the fact that no full-time job meant I would be able to take my daughter to her first day of kindergarten, help out at her school and pick her up every day. I picked up odd jobs here and there to help us out financially but, little by little, our savings were dwindling.

Things were good, but not being able to provide like I use to began to get the best of me. My mood began shifting. I started to keep a lot of things to myself, going into a deep funk that I thought I had a handle on. Depression never really leaves you, you just get good at hiding it from others. Or at least I did.

I feel like I’ve been suffering from depression since junior year in high school. I didn’t know it was depression back then, I just thought I was moody. As I got older and started reading more about it, I realized I was depressed but felt ashamed about feeling this way. I hid it from my family and friends and tried my best to not let it get the best of me. Even as an adult, I have been hiding it but being unemployed brought it on even more.

As the next summer came, I again was on the job hunt. My wife was the only one working and my daughter would always cry when we had to drop off her mom in the morning. It would become a normal routine: She would cry on the ride to and back, and once we got home she would return to normal.

One morning was different.

I was depressed about facing another year of unemployment. The constant calls from debt collectors were taking a toll on me. That morning my daughter’s cries were too much for me to handle. The entire ride home she screamed and yelled she wanted her mother and I tried soothing her, like I did in the past, by telling her “mom will be home soon” and “she will call you when she gets a break at work.”

It seemed everything I told her was being drowned out by her cries. I knew once we got home she would relax and play with her toys like nothing was wrong, but like I said, that morning was different. She kept crying and said she wanted to go to her grandparents’ house (my in-laws). As much as I tried soothing her, nothing worked. I caved in and called my in-laws.

The crying stopped as soon as she was picked up.

The letter I never finished

What kind of father was I if I could not take care of my own daughter? What did it say to my in-laws that my daughter did not want to spend the day at home with her dad because she missed her mom?

That moment pushed me to the edge.

If I could not contribute to my family like I wanted to, I decided I should not be here anymore. I grabbed my notebook and pen, and started writing a letter to my wife and children.

The tears soon began flowing from my eyes. I started feeling ashamed about having these thoughts, but I still felt that it was the best thing to do.

I got as far as writing down my wife’s name before I couldn’t write anymore.

When you are a stay-at-home dad, most of the people you would normally reach out to for help are not around during the day. They are at their jobs. As I sat near my laptop sobbing, I decided to reach out to my fellow dad bloggers online just to talk to someone. I needed to get these thoughts out of my head.

As soon as I hit the navy blue “Post” button, they started messaging me. A few sent me the suicide prevention hotline information, so I went to that website to “talk” to someone. It was strange how I did not want to talk to one of these counselors, but I felt comfortable reaching out to my brothers about what was troubling me.

The funny thing about having a virtual “suicide prevention chat” — it would take four to five minutes for the person on the hotline to respond to my typed answers. The dad bloggers I talked with online were giving me feedback or advice instantly.

I call those guys my “brothers” because that is exactly what they are. I grew up with two older sisters and all my cousins were female. Being a part of the dad bloggers community creates bonds that are kind of hard to describe, but when I finally met some of these guys in person at a conference in February 2015, there was no awkwardness there.

We all know about each others families and jobs from our blogs and Facebook posts. We were all connected. From guys who just started writing online to those who have thousands of followers, we are all striving for the same thing: To change the world’s perceptions of dads. I am extremely thankful for these guys and wish there was a way I could repay all of them for helping me through this really bad moment in my life.

I talked to my wife about what happened later that night. I threw out the letter because I did not want that reminder in my life. I decided I needed to seek some sort of help. The thought of seeing a psychologist scares me, but it is something that I must do to get better.

I still have my dark days. I don’t think they will go away, but I try to not show it in front of my kids. I used to hide my depression from 8-to-4 when I was at work. It’s a little different when you are home all day with your children and have to put it aside until they go to sleep.

I have been fortunate to start getting a few paid online posts for my blog. That helps out a little, but we still have our days when things get tough financially. I am now working two jobs that I enjoy, but I would love to be in front a classroom again or have a regular 9-to-5.

Lately, the song “1 of 4” by Aesop Rock has been playing on repeat in my head. This song talks about his battle with depression, and encapsulates what I have been going through. As I previously stated I can not thank my brothers enough for what they did for me, but these words are just the beginning.

“I guess it is kind of funny when you look at it from a step back,
How one man can literally buckle under the same pressures
Other men operate normally under
I have scoped this out from all angles multiple times
I have been over everything in my head, still I can’t think anymore
But I guess sometimes, when you can’t breathe,
there are people there to breathe for you
I am lucky enough to have those people around me
Thank you for helping me to not die
Thank you for helping me to not die”

If you ever have suicidal thoughts or are battling with depression, seek out help and remember that your life has a meaning in this world. The National Suicide Prevention Lifeline offers 24/7/365 help through its website, www.suicidepreventionlifeline.org, or over the phone at 800-273-TALK (8255)

A version of this first appeared on FanDads. Photo: PdPics 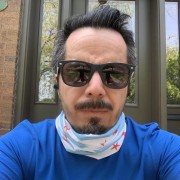 Victor Aragon Jr., a member of our Chicago Dads Group, is co-creator of FanDads, where he writes about trying to be a good father and sharing the geeky things he loves with his kids. When he is not chasing around his daughter and son, he can be found running through mud on an obstacle coarse race or just running to try to keep in shape for his kids. You can follow his adventures on Twitter and Facebook.