Shortly before the incident. Photo by: Brandon Garcia

One thing I find interesting about having a child is how a mundane event, such as doing the laundry, can turn into a pediatric emergency room visit.

I’ve learned doing laundry in an apartment building with an 18-month old is a great way to tire a kid out. My son really enjoys running down the hallway, taking the elevator, pushing all the buttons, and saying hello to anyone he meets. After my little helper goes back and forth to the laundry room a few times, he’s wiped out. By the time I’m finally folding the clothes on our bed, I just let my son lay down and play with the pillow covers.

Watching him there, my mind relaxed and I enjoyed the moment. Then he leaped up, threw a cover over his head and proceeded to flip off the corner of the bed a la Greg Louganis.

I quickly picked him up in an attempt to ease the pain but, as he always does when it hurts really bad, he held his breath in the middle of a big cry. I thought to myself, no big deal.

But then he passed out. Just — boom.

He quickly snapped out of it, but the little dude definitely just passed out in the middle of crying.

I could tell there was something not right with him but couldn’t put my finger on it. I told sitter what had happened and to keep on eye out for trouble. I was running late for work now and calling my wife before I left was not what I wanted to do and, in hindsight, maybe I shouldn’t have since she proceeded to freak out. She promptly left work to take our son to the emergency room while took off for my job.

Soon I was clear across town with a dilemma: let my wife take care of the situation on her own or be with my family.

I chose the latter.

When I showed up at the pediatric ER, our son looked fine, but my wife had been waiting for an hour to see someone and that didn’t help calm frayed nerves.

One glaring take away from this experience was that, when they finally saw our son, the doctors and nurses all asked my wife the questions. Nobody once asked me what happened until my wife told mentioned she wasn’t there during the backflip, I was. When are people going to realize the mother isn’t always the person around the child? But I digress.

An hour turned into two and when our son was wheeled into a room for a CT scan. I gave up trying to tell everyone they were taking this a little too far. I really didn’t like it when the doctor’s gave my son some kind of medicine to make him forget what was happening. That was the freakiest part of the entire night because my son was out of it. He looked dazed and exhausted.

We didn’t get home until 10 that night and all we could really do was feed the boy and put him to sleep. What really rocked my already fragile ego as a good parent was when my wife jokingly said, “Well, if he has problems later we know it’s from you letting him do a back flip off the bed.” 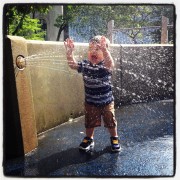 Brandon Garcia of the NYC Dads Group decided to stay home and help with his son while his wife went back to work. He has covered the Beijing Olympics, European Championships and numerous breaking news events for the Associated Press in his career. Brandon moved to NYC in 2005 but still cheers on his hometown Seattle Seahawks and Mariners. He is also an avid swimmer and snowboarder and hopes to raise his son to enjoy outdoor activities.