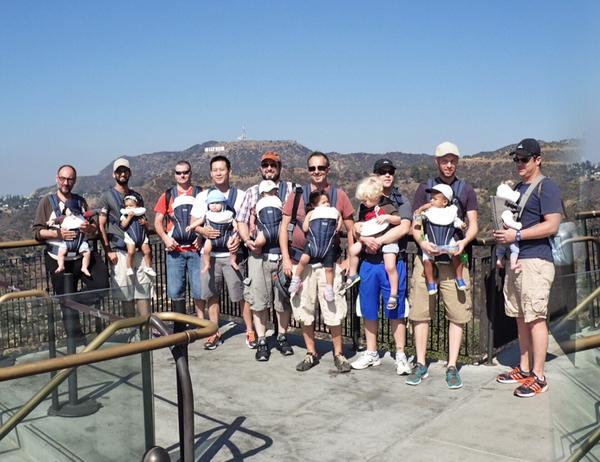 Members of our L.A. Dads Group stand in front of the Hollywood sign on their 2014 walk through Griffith Park Observatory.

City Dads Group will team up with baby product giant BabyBjorn to “Embrace the World” together during the 2015 International Babywearing Week celebration.

International Babywearing Week (Oct 4 – 10, 2015) promotes and advocates the many benefits of using a close-fitting baby carrier to bond with your infant and help him or her thrive through increased human contact and touch.

Several City Dads Group outposts are celebrating this positive health experience, along with the importance of dads being active caretakers of their children, by organizing members to take leisurely group walks at iconic and well-known locations next week. Our flagship community, NYC Dads Group, will be kicking things off this Sunday, Oct 4 together with the Baby Buggy Fatherhood Initiative for a stroll through the Bronx Zoo. A few of the other events include:

BabyBjorn, City Dads Group’s official event sponsor, will provide all our participating fathers with a new baby carrier for the day’s activities.

In recent years, our babywearing dads have walked over the Brooklyn Bridge, marveled at priceless art at the MET Museum, and climbed the “Rocky” steps together in Philadelphia among other things.

*Disclosure: City Dads Group has been compensated by BabyBjorn for this sponsored event. City Dads Group only works with brands that create products or services that we believe in and use ourselves. The opinions expressed in this blog entry are authentic and our own.